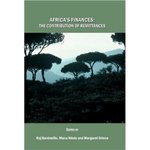 The Reconciliation and Development Project (R&D Bonds) was originally conceived as an attempt to involve the South African expatriate community in the process of national reconciliation that began with the end of apartheid. It has evolved into a broader effort to create a financial instrument capable of raising financing from both expatriates and the domestic market for small scale revenue generating development projects that will produce jobs, services, and opportunities for poor and historically disadvantaged South Africans. Through this evolution, it has become clear that the project, which if implemented will be unprecedented, has the potential to teach some interesting and generally applicable lessons on the roles that private financial markets can play in attracting both domestic and international funding for sub-commercial development projects and in promoting reconciliation in post-conflict societies. The chapter is divided into three sections. The first section describes the genesis of the R&D Bonds Project. The second discusses the design of the R&D Bonds. The final section highlights some of the interesting development financing issues that arise from the project.

Africa's Finances: The Contribution of Remittances

Notify me of New Papers