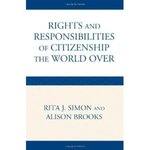 Rights and Responsibilities of Citizenship the World Over

In this eleventh volume in The World Over series, Simon and Brooks examine and compare the rights and responsibilities of citizenship across twenty-one countries. The countries included are Canada, the United States, Argentina, Brazil, Great Britain, France, Germany, Italy, Sweden, Hungary, Poland, Russia, Israel, Egypt, Iran, Nigeria, South Africa, India, China, Japan, and Australia. In addition to reporting on the rights that citizens enjoy in these countries, as for example the right to run for and hold public office, vote, obtain scholarships, and hold government positions, the authors also describe the responsibilities that are attached to the role of citizen_for example, to serve in the military, serve on a jury, and pay taxes. When available, Simon and Brooks report on public opinion data on how proud respondents are of the country in which they are citizens, as measured by such variables as whether they would rather be a citizen of their country over any other country in the world, how proud they are of their country's political influence in the world, how democracy works in their country, and whether they believe they should support their country even if it is in the wrong. Following a brief chapter on the history of citizenship, the book is organized such that the first section provides a country-by-country profile of each of the issues describing rights and responsibilities and reports on the public opinion data. The second part is explicity comparative and describes the countries against each other.

Notify me of New Papers